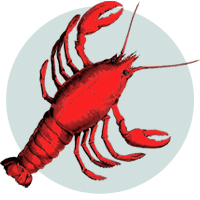 First published in the August 2017 issue of ‘Defenestration‘, a literary magazine dedicated to humor.

Perfectly cooked lobster is surely one of life’s pleasures. Making lobster on your holiday may seem like a lavish affair, but we’ve put together an easy recipe anyone can make – spectacular succulent lobster in sea salted water.

How to tell when they’re done? Be aware that not all humans will roast at the same rate. The amount of time it takes depends on the human’s complexion, melanin production, and how well the air can circulate around them. Repeat step one to six to taste. When done the human should be dry, but still pliable; flexible, not brittle. Texture is about that of a dried apricot, best described as leathery. Aim for a vivid, deep, red colour.